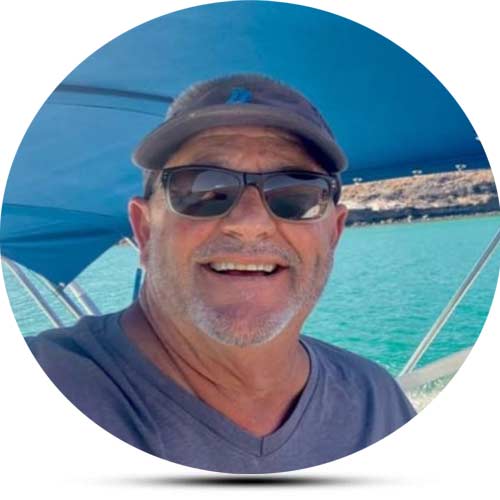 Go Baja Sailing’s owner, Mike Madlock is a southern California native so trips south of the border to Baja were a regular occurrence and just part of the SoCal culture. Mike first visited La Paz in 1985 after a sales flyer offering an “all-inclusive weekend getaway in La Paz” came across his office fax machine. He probably fell in love with the La Paz area on that first “all-inclusive” trip and but after multiple visits, over 15 years, he purchased a home and established permanent residence there in 2000.

Mike and his brother ran fishing charters out of La Paz Bay as “Go Baja Charters,” with his brother handling things in La Paz, while Mike traveled back and forth to California, running his mortgage company, a real estate development company and a brewery/restaurant (at the time, one of the first micro-breweries in Southern California, located in Newport Beach).

In 2008 after a friend who ran a bareboat charter operation passed away, Mike purchased a 41’ Morgan Out Island ketch, Sea Escape, from the estate and continued running bareboat sailing charters as well as fishing charters. It just so happened that one of his bareboat charter customers was a sailing school based in the U.S. The idea to start a sailing school based in La Paz, and the Go Baja Sailing brand, was born shortly after, in 2013.

In 2010, Sea Sueno, a Catalina 38, joined the fleet and the school launched with Sea Escape and Sea Sueno as the primary sail training vessels. In the first couple of years there were just a handful of students with just 24 students for the 2014/2015 season and by the 2017/2018 season Go Baja Sailing had grown to 85 students. Then in 2019 Sea Escape was retired, Sea Sueno was put on part-time duty and a later model DuFour 45 and a Fountaine Pajot 44 catamaran took center stage in the Go Baja Sailing fleet.

Today, 37 years after that first “all-inclusive getaway” to La Paz, Mike still lives full time in La Paz with his teenage son, Mikie. He has moved on from his other businesses and pours most of his energy into his twin companies, Go Baja Sailing and Go Baja Charters. This year, over 200 new sailing students will sail the beautiful, azure waters of The Sea of Cortez with Go Baja Sailing School, taking the first steps towards making their sailing dreams come true!

“Our motto is Making Your Sailing Dreams Come True. I love that over these past years Go Baja Sailing has been able to connect almost 700 new sailors to their sailing dreams – and the really exciting part is that we’re just getting started!”

Check Out Our Current Summer Specials!!!