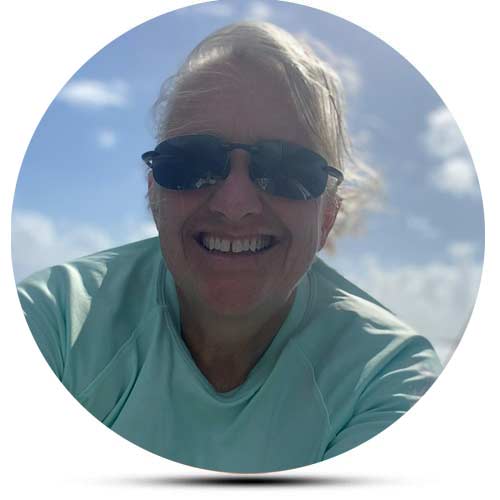 Captain Julie got the sailing bug back in the 1980’s when he was stationed in Norfolk, VA. She sailed with a friend who had a boat then took a class and learned on a small boat. She didn’t sail for years until getting stationed in Pennsylvania. She and her husband drove past a house several times with a small 16’ O’Day that hadn’t moved in years. They offered $500 and the owner took it. She thought she struck gold when they bought a 23’ San Juan from a friend. They sailed on it for 3 years and learned how to do basic maneuvers and how everything worked. They moved on to a 26’ Pearson and then a 28’ Sabre that was shared with a friend who has Parkinson’s and then to a 30’ Hunter. Finally, in 2017 Capt Julie bought TipSea, a 37’ Gulfstar. That’s when she really got into the bigger cruising boats. She studied and earned her Capatains license and ASA sailing instructor certifications and hasn’t stopped since. She has taught sailing in the Caribbean and Chesapeake Bay and enjoyed many adventures sailing in Maine, Bermuda, Puerto Rico and the USVI. Capt. Julie says, “I believe everyone who has the desire to sail should do so at least once. Sailing gives you confidence to tackle almost anything in your life.”

Check Out Our Current Winter Promotions!!!